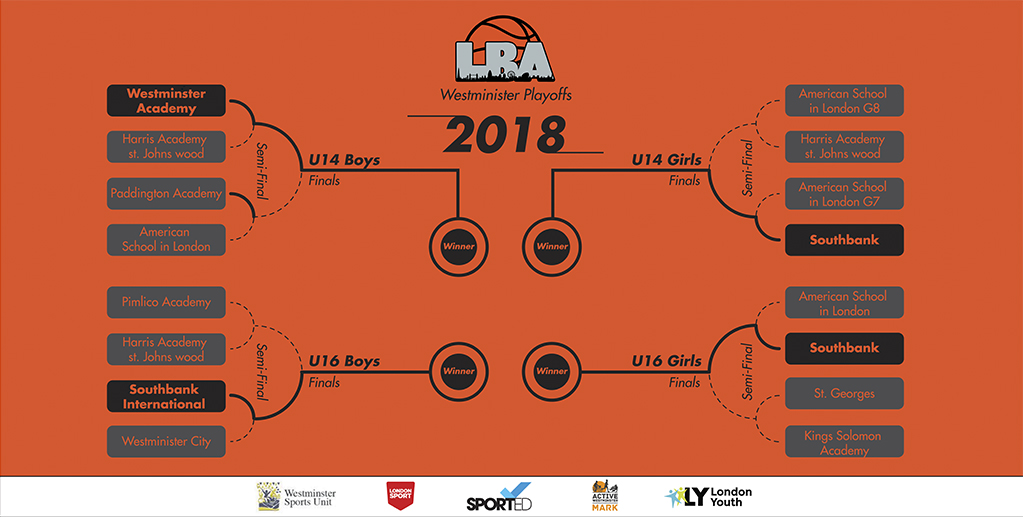 The city of Westminster, school league playoffs are here and we would like to honour everybody in the league but give a special congratulations to the teams that made it to the playoffs. The way this was formatted is that the top two teams from each pool advanced, but for the girls, there was only one pool in each category so top four teams advanced. There will be the semi-finals and then the finals, where 1 team from each of the 4 categories will be crowned champions of season 2017/18. Everybody has been informed of who they have to play and games are being scheduled between February 19th to the 30th of March 2018. It’s set to be great matches we can all get to witness, as the “LBA Media Crew”, will be attending games, bringing down banners, and equipment aiming to stream live, take pictures & video clips, which will be posting on LBA accounts such as Snapchat, Instagram and Facebook. We wish all the teams involved every success and again congratulate the players, your coaching team and school organisation for supporting you and making this happen. Please note: Once games have been completed we will update the image above so everyone can stay informed on the progress.

We have got our first update on advancements!  In the U14 Boys division, Paddington Academy advances to the finals!  In the U14 Girls division, Southbank advances to play in the finals! Southbank also advances to the finals in the the U16 Girls division!  There are still games to be played so make sure to stay tuned for more updates as we follow the teams and crown a champion of each division! In the other semi-final in the U14 Boys Division, Westminster Academy defeated Harris Academy St. Johns Wood 33-36.  They will advance to play Paddington Academy in the finals! In the U16 Boys Division, Southbank International beat Westminster City 36-35! In the finals, they will play against Pimlico Academy, who beat Harris Academy St. Johns Wood 48- 18!

We have crowned our first champion in the Westminster Playoffs!  In the U14 Boys Division, Westminster Academy defeated Paddington Academy 32 – 18!  Both teams gave tremendous effort and left everything out on the court!  Congratulations to both teams on making the finals and to Westminster Academy for their championship! In the U16 Girls Division,  Southbank has defeated has been crowned the champion!  Congratulations to them on a great season!  In the U14 Girls Bracket, Southbank defeated Harris Academy St. Johns Wood in a very tight game.  Both teams battled hard until the final minute!  Congratulations to both teams on making the finals and to Southbank on their championship! In the under 16 girls Southbank prevailed to become champions, would like to congratulate the players on our solid season but also acknowledge the coaching staff and team management who put a lot of work ensuring they got a great experience. As for the under 16 boys this game got postponed a number of times but we couldn’t allow it to be a forfeit and although the league was supposed to finish March 29th, this game took place May 2nd at Pimlico Academy given them the home advantage and it was a nailbiter of a game with the stage set before with over 60 people watching plus Southbank bring in their home crowd to come and support them. Both teams took it very seriously and was ready to battle it out on the hardwood floor but they could only be one winner and Southbank were able to tame the great Pimlico in order to be victorious, So well done to Southbank I’m being crowned champions! We will be updating the bracket shortly.