With 33 teams representing 12 schools, the High School Basketball Leagues are on the rise. Much of this growth stemmed from integrating private schools into the league. Bringing together public and private schools in healthy competition has benefited everyone involved. Collaboration from the Westminster Sports Unit was also crucial to the leagues success.

The LBA would like to congratulate the Pool champions from across the league: 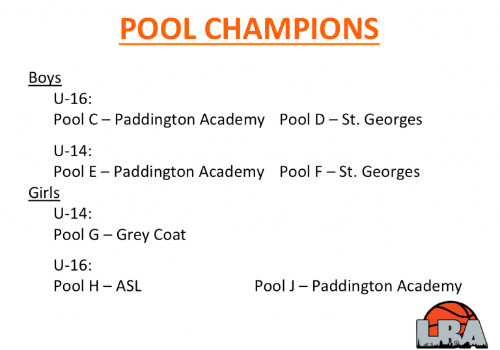 Perhaps the greatest achievement of the season was the amount of girl’s teams involved. There is so much potential in women’s sports, and the LBA hopes to continue this upward trend. Our goal is to create an environment that makes it easy for every girl to play sports. We’re proud of the 3 pools and 14 girl’s teams that participated in the league, and will work to see this number grow. Our vision is not just for the borough of Westminster. Once we have a system in place that accomplishes this goal, it won’t be hard to replicate.

This tremendous amount of progress is certainly encouraging, but there is still more work to be done. Short notice cancellations and confusion over scheduling became an issue, resulting in too many games not being played.

LBA has seen first hand the benefits that basketball has on young people, and is determined to make sure that every player gains from this league. The best way to do this is to make sure that no games are missed because of disorganization between coaches, parents, and coordinators. It’s not fair to the players, and the LBA will do all that it can to ensure that each student gets a full season’s worth of basketball.

Another improvement to come will be the use of Krossover, a software program that provides game stats, replays, and play-by-play breakdowns. Many teams didn’t take advantage of this, but the feedback from the few who did was great. The LBA is currently in the process of assembling a crew for next season to photograph and film league games as well as conduct player and coach interviews.

We will also be mixing up the pools into advanced and intermediate leagues. All teams and players will benefit from a more even level of competition.

There is a tremendous amount of promise in the High School Leagues, and the LBA is excited to improve and expand the leagues in the years to come.