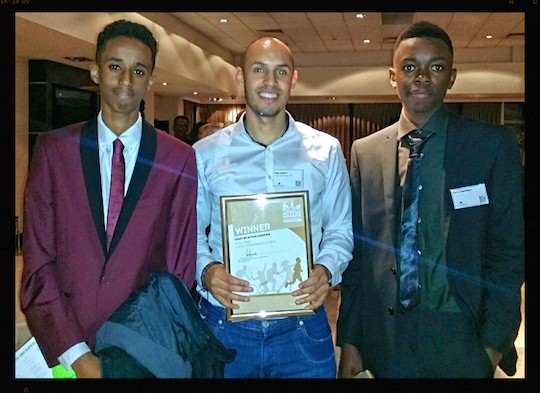 The LBA’s very own Tony Lazare was awarded “Coach of the Year” at this years Active Westminster Awards. The awards celebrate the contribution of individuals and clubs who make a difference through sports and physical activity. From your team here at the LBA, congratulations Tony and we could not be more proud of you!

The awards ceremony took place on November 28, 2014 at the famous Lord’s Cricket Ground. While at the ceremony, Tony, his players, and staff were surrounded by famous olympic athletes, even having famed English gold medalist, Amy Williams, present Tony his Coach of the Year award. Amy was kind enough to even pose for pictures, as well as show LBA players her gold medal!

The LBA would also like to give a special shoutout to Jade Johnson, a silver medalist who competed in the Commonwealth Games, for talking to our LBA players and offering them motivational advice and words of wisdom!

We would also like to recognize Helouise Marissa Michel-Roseman, an LBA volunteer basketball coach who took home second place in the “Active Volunteer of the Year” category! Helouise has given up her time to attend numerous courses to improve her skills in order to help others during training sessions. She is the first volunteer of the year to have completed the full core cycling training and has shown outstanding commitment to continuous improvement and personal development. Congratulations Helouise and thank you for all that you do for the LBA!