We have revised our Mission Statement and are proud to announce it! There are two parts to it and everything we do should link to this.

2019 was a massive year for the LBA – not just for our team of hard-working volunteers, interns and staff but also for our service users. Let’s take a look back at what great things we’ve achieved over the year and give you all a little preview on what 2020 will look like. 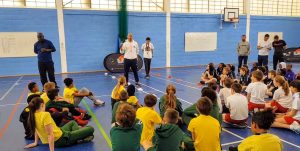 The beginning of the year started with 3 borough Primary School festivals Westminster, Islington and Hammersmith & Fulham, which each involved 15 different schools and 150 students per event on average. This was in line with the school games competition, which is part of the National Players Pathway. The festivals were great fun for both us as a charity and for the kids. It was fantastic to see basketball being played so passionately by young students and seeing them enjoy it so much! 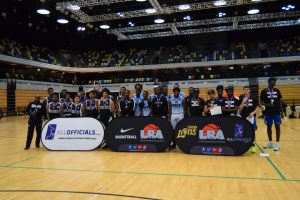 May brought the end of college tournament. We faced a few obstacles in arranging a venue and date that could accommodate the college teams but we managed to successfully overcome this and we held a record-breaking tournament! The players had the opportunity to play at the Copper Box Arena, a venue that has hosted a number of Olympic and international sports games. And what made this year even more successful was the LBA’s partnership with AllOfficials. AllOfficials is an online platform that makes hiring Referees and Table Officials easy, fair and accessible. We’re always looking for ways to push forward and make changes in the world of basketball and partnering with AllOfficials has done just that!

Speaking of collaborations, we’ve had a few more over this year that we’re really excited about. Professional team, The London Lions have given us amazing discounts for tickets (for schools and individuals) to watch their professional games and they’re about to work with us with our Future Talent programme. The London Lions, as well as London City Royals have attended our events, handed out awards and gave a great motivational speeches! And, we’ve been in talks with Nike who would love to work with us, which is massive for us! 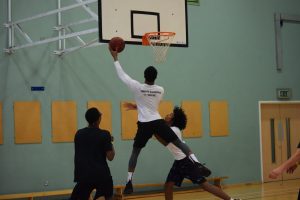 Throughout the year, much like previous years, the public have made great use of our tailored programmes. Every school holiday, we ensure that there are holiday activities for young people, and an excess of 1000 young people took part! This was a huge success, once again, and we’re even seeing new cohorts of young people coming into the system, as well as familiar faces from previous years. 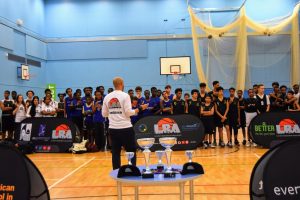 The end of the year was focussed on holding and organising three mid season tournaments at Secondary schools for U14 and U16 teams, involving approximately 500 participants in each borough. In November, we held our first Tournament in Brent, at Crest Academy and in December, we held the Westminster mid season tournament at the American School in London. Both these events were held at fantastic venues and we are so pleased with how the events turned out as well as the wonderful feedback we received. As well as these two midseason tournaments, we also provided assistance in Lambeth for their tournament. We worked alongside Norwood School who, we have to say, put in a lot of work to make this happen. Working with them has given us a greater understanding of the boroughs needs and next year we will be taking more of a lead role in the Lambeth tournaments. 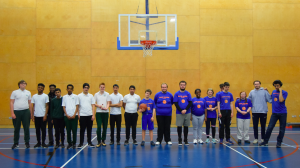 Another amazing service we are proud of is our visit to SEN schools. This year, a group of our great coaches gave the kids an enriching and enjoyable session of basketball fun. Both the coaches and students had a rewarding day full of quizzes and basketball sessions where some of the students even became assistant coaches!

As well as all the great things we’ve achieved over the year, as shown above, the LBA has successfully raised £200,000 in funds which will go towards the core costs in the running of  the charity. Not only have we raised a significant amount of money, but the Mayor of London’s office will now be connecting us with the whole of London. Whilst we have been operating in Brent and Lambeth, access to these networking opportunities will allow us to navigate and expand through multiple boroughs across the whole of the city when we are ready.

We are totally ready for the expansion into the boroughs of Brent and Lambeth as well as beginning to venture into Barking and Dagenham! We’ve hired three full time and five part time staff to work alongside our volunteers and interns, all which are raring to continue to get stuck in as we grow. We do want to say that our volunteer and internship scheme has been paramount to our success, without them and their hard work, we wouldn’t be in the position we’re in. As well as this, we have over a 100 coaches and 350 Officials available and these numbers only continue to grow through our qualification programmes at the LBA.

We’ve been working incredibly hard this year and it has definitely paid off! We even won the My Westminster Award which is our 10th Award in 7 years. We are incredibly proud of this and grateful that our work in the community has again been noticed. We were also invited to participate in the upcoming 2020 Charity Film Awards and we have submitted a great film that showcases our charity! And, with the Mayor of London’s office backing, we know that their support will be a huge game changer and we are in the best position we’ve ever been in 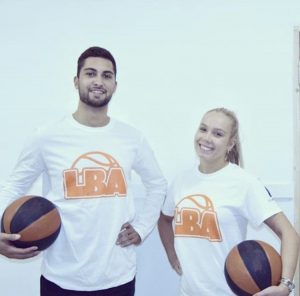 So, from the start of the coming New Year, you should begin to see a difference in both how and where we operate in London. Still, there is still quite a lot of work to do and we know that in any form of expansion, obstacles will be encountered. But we are preparing for a number of eventualities to be sure that we will be able to overcome anything we may face in the future to maintain the great and valued service we provide to our communities.

And before we sign off for this year, we really want to say thank you to all of you who support us and a massive thank you to our staff and volunteers who always push boundaries, maintain quality and work tirelessly throughout the year without fail.