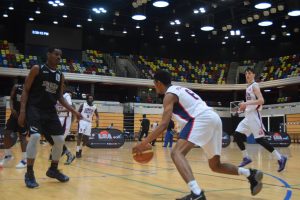 The Tournament began with the round-robin group stages, which provided a lot of excitement and entertaining basketball! In Pool 1, John Ruskin College and SFX College progressed to the semi-finals after finishing first and second, respectively, due to great team performances and impressive play from their star players.

In Pool 2, Alec Reed Academy dominated their way to first place, amassing a 3-0 record. Quintin Kynaston scrapped their way to a second place finish in this competitive pool with only six players due to some gutsy performances, including a buzzer-beater floater that secured their semi-final spot.

In the semi-final match-ups, John Ruskin College defeated Quintin Kynaston on their march to the finals and Alec Reed Academy dispatched SFX College to meet the only other undefeated team in the final. 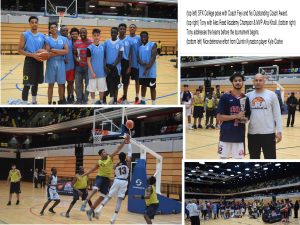 In the Final, Alec Reed Academy ran out to a quick lead over John Ruskin College, but in the second half John Ruskin came storming back to close the gap. In the end, their spirited rally was not enough and Alec Reed came away with an undefeated record and the winners of the 2017 LBA College Tournament

As for the individual honours, the London Thunder BC MVP was won by Alec Reed star Afra Khalil due to stellar point guard play and leadership. He was extremely consistent throughout the day in getting his teammates involved as well as scoring plenty for himself. The London Youth Stand Out Coach Award went to Feyi Fowosere of SFX College, who played with great energy and commitment throughout the day – a tribute to Feyi’s coaching. The Spirit Award for the day went to all the Referees and Table Officials. It was a long day, but they carried out their jobs with professionalism and class.

Check out the video recap and photo album from the day below:

The rules for the tournament are simple. We will be following FIBA’s rules where possible. Here is an outline of the rules on the day:

We would like to say a huge thank you to our sponsors and affiliates!